A Little Taste of Iceland

Mary Koostachin—I've encountered many different species of animals in northern Canada. But I had to go all the way to Iceland to meet a killer whale, Keiko, who played Willy in the movies. Keiko was kept an area called Klettsvik Bay in Westman Island, Iceland, before he died in 2003. I was visiting my boyfriend in the summer of 2002.

We weren't allowed to go close because the trainers said that they were trying to teach Keiko to live on his own, instead of depending on people.

Iceland is a small European country, 100,000 sq. km. in size, and is located just below the Arctic Circle in the North Atlantic between Greenland and Norway. Its landscape consists of glaciers, mountains and volcanoes that erupt more often in recent years. 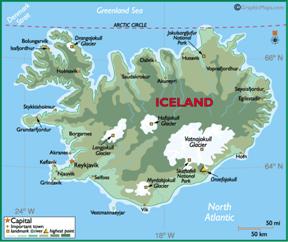 The whole island would be a permanent glacier, if it were not for the Gulf Stream which loops around the country. The central highlands are uninhabited, but are used for grazing in the summer time. In winter the highlands catch more snow than the rest of the country.

The summer along the coastline tends to be rainy with several frost-free months. Temperature seldom exceeds 20°-25° Celsius. Winter brings a lot of snow but it is seldom colder than -15° Celsius.

Iceland is a European country culturally, and is proud of its customs and traditions. Geographically it is considered to be on the American side. The North Atlantic Rift actually runs through it.

I am an Aboriginal woman from Shamattawa, Manitoba, attending BUNTEP in Thompson, Manitoba to acquire a teaching degree. It was a good opportunity for me to go to Iceland because I had two months off from school. My boyfriend, Kolbeinn Sigurdsson., who wanted me to visit him and his mother, paid for my fare.

As I was boarding a jet, en route to Keflavik Iceland from Winnipeg, I was frightened like hell. I may be the first Aboriginal woman to go to a foreign country all by herself. 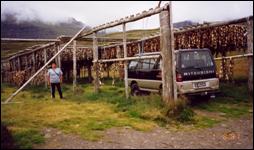 If it weren't for my traveling companion's having suffering a heart problem, I would not have been alone, but he had been admitted to a Winnipeg hospital. I almost changed my mind and not go, but my instinct told me to go, because I am the kind of person who likes to explore and I am curious about my surroundings.

My first stop was Minneapolis; I stayed there for an hour and a half. When I finally boarded the jet once more I felt relaxed because I knew that we wouldn't be making any more stops.

The flight was a five and half hour trip to Keflavik. It was about seven thirty in the evening when we left Minneapolis and it was five thirty in the morning when we arrived in Iceland. Kolbeinn came to meet me and took me to his hometown (Reykjavik). It is about 50 km from Keflavik to the capital city of Reykjavik.

I spent the next few days in Reykjavik getting to know Kolbeinn's family and enjoying their traditional food. This includes fish, mutton and thick flat cakes made out of rye meal. The most important thing I learned about their traditional dishes is that if you want a real taste of Iceland, you have to eat like a true Icelander, which means eating rotten shark meat that had been pickled, ram testicles which are also pickled, smoked sheep heads, pressed meat, blood pudding and, most importantly, dried fish.

I never tried to eat that stuff. I am not an Icelander.

One day, traveling with my boyfriend close to the coastline because it was easier for us to visit the harbors where the fishing plants are situated, we stopped to take pictures: rows and rows of fish heads were drying in the sun. The Icelanders crush them up to powder and they sent them off to Africa where they are needed for protein.

The meal is boiled into slurry, spiced, and everyone has a feast.

The scenery was amazingly beautiful with the natural environment unspoiled by pollution or man-made clutter. There is an abundance of bird life swimming about and flying everywhere, sheep grazing along the green pastures, the glacier coming down like white ice-cream creating a sizzling water falls.

The landscape is so striking, with lava fields everywhere, no sign of rodents because they would not survive in these kinds of conditions. Every so often we came across geothermal sites, which heat most of the country houses. Sometimes we would stop and take pictures of the hot springs and geysers.

I will never forget this unique country; how entertaining it is to the eyes of the visitors and, of course, the taste of Icelandic food.